Ms. Goetcheus’ practice is devoted to family law, including child custody, child support, alimony, equitable distribution, absolute divorce, domestic violence, termination of parental rights, adoptions, separation agreements, property settlements and prenuptial agreements. She prides herself on being responsive to the needs of her clients by returning phone calls promptly, billing efficiently and litigating effectively. Ms. Goetcheus represents individuals pro bono through Project Together and the Volunteer Lawyers Program. She lives with her husband, Richard Marshall, their three children, Matilda, Lucy and Harry and their three dogs, Elsa, Ziggy and Daisy. Recent additions to the menagerie include a kitten named Tiger Lilly and a Lionhead Rabbit named Ginger Cecilia.

Ms. Goetcheus can be contacted by phone at 919-850-9199 or by email at sgoetcheus@sandlinfamilylaw.com. 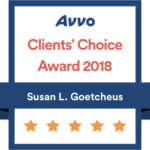